I love music. But not at the 80 watts per channel that The Taste Tester prefers. My ears would bleed. I’ve spent many years playing the piano and was in an orchestra for a very long time. There’s usually a song running through my head and I hum to that internal tune to the point of annoying others. The odd thing is, if there’s music playing, I find it hard to do anything else but listen unless the music itself is pretty mellow. I’ve been trying to branch out because I’ve completely lost touch with much of current music which seems like something that happens to old people (and I’m not that old yet). Pandora and the like help a bit but my stations all start sounding the same after a while. NPR and other online radio shows/stations are useful too. Where do you find your new music?

I’ve been listening to the album Sister Kinderhook by Rasputina. It’s compelling but I haven’t yet formed a complete opinion. Still listening, though. 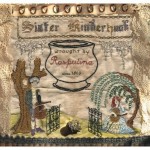