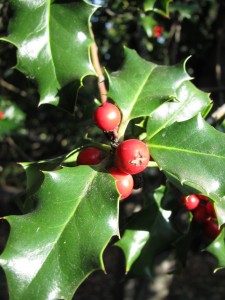 I like traditional Christmas carols and holly features in one of my favorites, “The Holly and the Ivy,” where it’s explained as a symbol of Christmas. Of course holly has been adopted from earlier celebrations…particularly the Saturnalia. Holly was supposedly sacred to the Roman Titan, Saturn. Oh, the Saturnalia was celebrated in December too.

Don’t eat the berries! They’re poisonous to humans but great for birds.