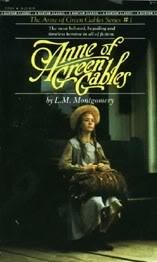 The edition I read the first time around.

Anne (with an “e”) of Green Gables and Emily Starr are two of the beloved characters created by Lucy Maud Montgomery who was born on this date in 1874. Did you read all the books? I read them over and over until my copies fell apart. They’re kids’ series but still comfort reads. A while back I discovered that most (not Anne of Windy Poplars or Anne of Ingleside) of the Anne books are available for free for e-readers or to read online at Project Gutenburg so every once in a while I read one again. Also fun are the two miniseries starring Megan Follows as Anne: Anne of Green Gables and Anne of Avonlea (sometimes called Anne of Green Gables: The Sequel) though I haven’t watched them in years.

DO NOT under any circumstances watch Anne of Green Gables: The Continuing Story (2000)–don’t know where that one came from, the story goes way off the rails, and it just seems best to ignore it.

Since I’m talking about books (AGAIN), this story of intricately carved book art left around Scotland’s Edinburgh is amazing and touching:
Part 1: “Who Left a Tree, Then a Coffin in the Library?”
Part 2: “The Library Phantom Returns”

Don’t forget to come back tomorrow when we start our Christmas countdown with our advent calendar adventure.