I’ve finally started reading the Inspector Armand Gamache series by Louise Penny.  At the moment there are seven books and I’m only on the third.  But, I read the first two books in two days and didn’t wait to start the next one so I have high hopes for the rest–enough that I’m recommending them to everyone before reading the entire series.

Mostly set in the seemingly idyllic village of Three Pines (in Quebec, Canada) not too far from either the US border or the big city, Montreal, these books are mysteries and reflections on life and emotions. We learn a little about the francophone/anglophone outlooks on life and culture.  We meet the extremely quirky townspeople of Three Pines.  Throughout, there is homicide detective Gamache who is gentle and wise; interested in teamwork over self-promotion; compassionate; and trying, always, to do the right thing. This has stalled his career to some extent and we get glimpses of something ugly happening within his department, the Sûreté du Québec, that doesn’t look good for him at all.  He is aware but continues to do his job: listening, observing, finding the murderers, and trying to do the right thing. 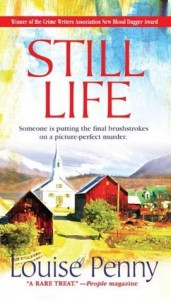 In order (and you really do need to read them in order so you won’t spoil things for yourself), the series contains:

I’ve heard the books described as “cozies” and that’s true to some extent. There are murders but little gore and guts.  However, evil does lurk.  If they sound interesting, give ’em a go.  I think you’ll be sucked into Gamache’s world.  It’s a pretty good place to be.

What’ve you been reading?