Today’s the anniversary of Jack London’s birth (1876). Like many, I had to read either White Fang or Call of the Wild (can’t really remember which was required but I have read both) in school. I wasn’t a fan. I’ve never been one for stories with animals as main characters–call it a character flaw on my part.

Time passed. Then my family spent my paternal grandmother’s 80th birthday at the house where she was born (now a B&B…it was a boarding house when she was born) in Glen Ellen, California.  Just down the road is Jack London State Historic Park. We visited. London wrote other things? Nonfiction too? His life was more adventurous even than his stories? Did my family meet him? Yes. Yes. Yes. And I don’t know. But, it was time to start reading his other works.

I’ve been back several times because the Park is beautiful–it’s the remnants of the ranch London bought in 1905 (the year before my grandmother was born)–and so worth a trip. You can see the remains of the house he and his wife Charmian were building that burned down just before it was completed, hike to his grave site, and see the museum. The museum/cottage on the property is, well, if I ever build a house from the ground up it’s having sleeping porches just like the ones in “The House of Happy Walls.” Plus the hiking through the Park and to the top of Sonoma Mountain is wonderful.

The Park is currently closed Tuesday-Thursday and is one of the California State Parks on the chopping block due to budget cuts–it’ll be totally closed starting July 1, 2012. Go While You Still Can. Who knows when/if it will open again.

And while I’ve got you thinking about Jack London, two of his short nonfiction works that I recommend are particularly evocative of California. One is an article, “Navigating Four Horses North of the Bay,” he wrote for Sunset Magazine in 1911 (later published as “Four Horses and a Sailor”). The trip that he and his wife took by four horse-drawn carriage (the theme of the article) is still a romantic one today and visits many of my favorite places in California. His description of the San Francisco Fire after the Earthquake, “The Story of an Eyewitness,” that he wrote for Collier’s Weekly in 1906 is another piece that I highly recommend. He was in the city as it burned.

Both can be found in the now out of the print Jack London’s Golden State edited by Gerald Haslam, various other publications, and in a multitude of places on the web (including the links above, of course!). 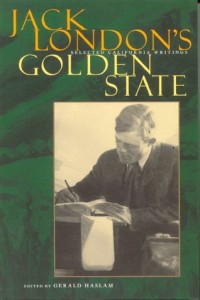