Do you have a personal motto?  They can be inspirational or representative.  I like Steinbeck’s Ad astra per alia porci which literally translates as “To the stars on the wings of a pig.”  There is some controversy about the use of alia in this case rather than alas (alia could be “garlic”).  However, it does appear that Steinbeck, for better or for worse, truly used alia.  Steinbeck’s Pigasus is also awesome.  A winged pig! 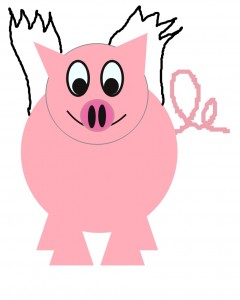 This leads to a silly story (ooh! another tangent).  When I was very young and someone would say something like “When pigs fly” with the clear meaning of “Never,” I would be terribly confused.  Because pigs can fly–at least “weather pigs” do.  Where did I get that idea?  A mishearing of a line in Lewis Carroll’s “The Walrus and the Carpenter.”  You can read the entire poem here but the relevant stanza is:

“The time has come,” the Walrus said,
“To talk of many things:
Of shoes–and ships–and sealing-wax–
Of cabbages–and kings–
And why the sea is boiling hot–
And whether pigs have wings.”

I thought it said weather and that it was a declarative statement rather than a question to discuss.  Also, the possibility of winged-but-flightless piglets never crossed my mind.

Anyway, back to the idea of a motto.  I want one.  It should be in Latin and at least a little bit original.  Ideas welcome.  And, if you have your own or have heard one you like, please share.  I’d like the inspiration.  I already know about Semper ubi, sub ubi.

One thought on “Of Steinbeck, Mottos, and Pigs”