We watched the rebroadcast of the victory parade in San Francisco last night and enjoyed seeing the way the fans and the San Francisco Giants interacted.  Looked like a love fest.  I’m surprised (it sure wasn’t a given this year) and gratified that “my” team won the Series.  If you’re a baseball fan, I hope you enjoyed the season no matter what the outcome for your team.  But, tell me: What will you do to keep baseball withdrawal at bay?  It’s a long time until Spring Training and I need suggestions, people! 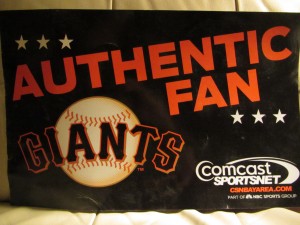 And, isn’t it funny how invested people (including myself) get into a game? And call teams “ours” and say things like “we won”…even though we had nothing to do with the outcome?

Edited to Add: Check out a corrected and expanded version of the below article in the Summer 2012 Issue of the magazine as well as our article on Fantasy Baseball in the Spring 2012 Issue of Quarterly Speed Bump Magazine. Now back to the post….

I just happen to like baseball.  It wasn’t always this way.  When I was growing up there were few televised games but any games that were on were guaranteed to be on at the same time as my favorite show.  I didn’t get to watch what I wanted so baseball sucked.  But baseball was always on the radio during the season (it was my mom and grandfather who were fans) and it gradually seeped in to my consciousness & subconscious.  When I went away to college, baseball seemed like a link with home and the familiar.  I’ve been hooked ever since.  It’s a game with a long history and lots of weird traditions that I appreciate.

After well over a decade of togetherness, The Taste Tester is now a fan (it was probably in self-defense).  I also converted one of my college roommates so stick with me long enough and you’ll become a fan too.  This is definitely a post for those who might be interested in watching baseball but have neither played nor had much exposure in the past.  For those folks, here are some things that will make your game-watching more informed and allow you to make conversation around the water cooler without sounding ridiculous (if you’re already a fan, let us know what else you think should be included for the beginner):

When a team scores, they’re called runs (NOT points).

There are nine innings in a regulation game.  A game can be official after five innings (maybe the weather was horrible and there was no chance of finishing safely).  Extra innings happen when the score is tied at the end of nine…they keeping playing until someone wins.  Innings are divided into halves.  The top half is the first part–say the “top of the sixth”–when the visiting team is batting.  The bottom half is the second part when the home team is batting.  There’s also the middle of the inning which is when the teams switch from being on the field to being at bat and vice versa (& when there will be a commercial break if you’re watching the game on TV).

The seventh-inning stretch is a traditional break for the crowd.  “Take me out to the Ball Game” is frequently sung at this time. 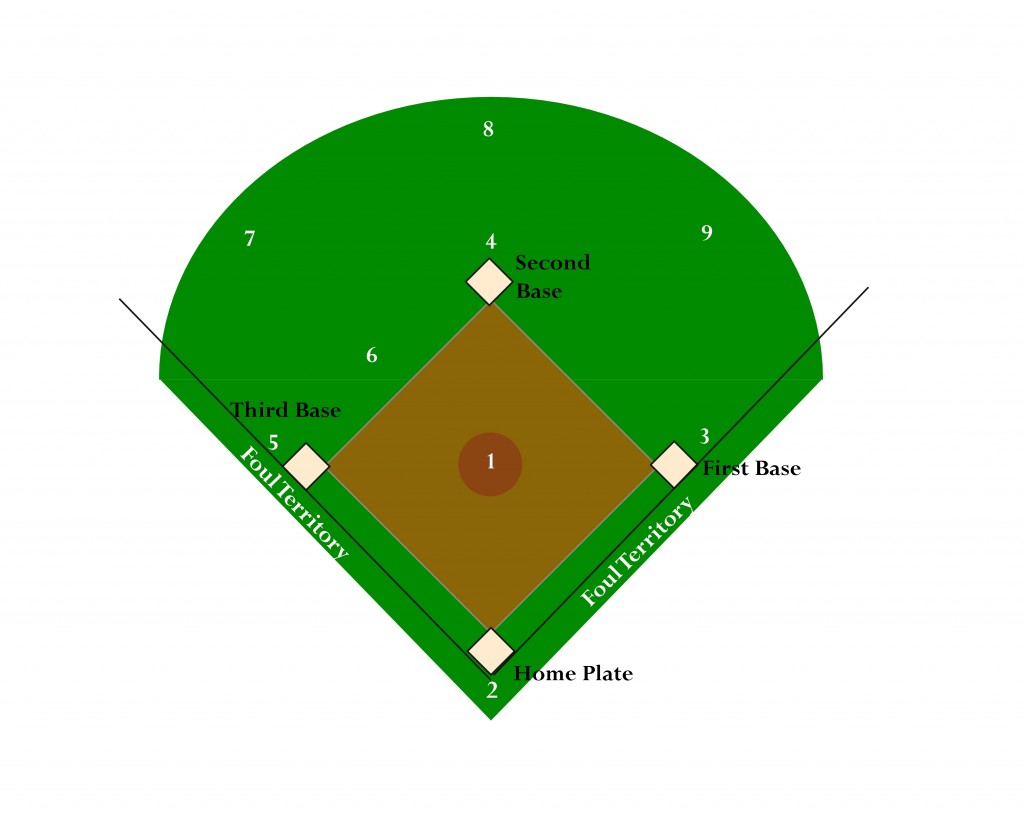 There are nine players on the field at a time: (1) Pitcher, (2) catcher, (3) first baseman, (4) second baseman, (5) third baseman, (6) shortstop, (7) left fielder, (8) center fielder, (9) right fielder.  Positions 1-6 are in the infield and the players are then referred to as infielders.  Positions 7-8 are in the outfield and the players are, therefore, outfielders.  The position numbers listed here are very useful for reading baseball box scores or if you want to score the game while you’re watching.  You may also hear that a play went, for example, 6-4-3 which in this case would mean the ball went to the shortstop who threw it to the second baseman who then threw it on to the first baseman.  This particular play was likely a double play–two outs at one time.  Triple plays are also possible.

A strike means that the batter either swung at the ball and missed or should have hit the ball because it was thrown in the strike zone (generally: over the plate and between the batter’s knees and the letters on his uniform…it’s called by the home plate umpire and the umpire is definitely wrong at times!) and he didn’t try to hit it.  Or, the batter hit the ball foul (unless there are already two strikes in which case he can keep fouling on forever, theoretically…unless he tries to bunt when he already has two strikes and then bunts foul). Three strikes and you’re out (a strikeout–aka a K).  Three outs and the “side is retired” which means it’s time for the other team to bat.

You can be out for many reasons: you strike out, a fielder catches the ball you hit, a fielder gets the ball and throws it to the base before the runner arrived, etc, etc, etc.

A ball means the pitcher threw the ball out of the strike zone and the batter just watched it go by without trying to hit it.  This batter may then be complimented by yelling “good eye!”–particularly if you’re watching a Little League game.  Four balls equals a walk (aka base on balls or BB).  That means the batter may walk to first base without having to hit the ball (often a bad thing for the team out on the field).  A batter can be intentionally walked.  Maybe he’s a really good hitter and the next guy is a mediocre easy out.  Or maybe the fielding team is trying to set up a double play.  The batter will also get to go to first base for free if he’s hit by the pitch as long as he made some show that he tried to get out of the way.

To be the winning pitcher, a starting pitcher must stay in the game for at least five innings and his team must maintain the lead.  If the starter is replaced by another pitcher to continue the game, this next pitcher (or pitchers) is called a relief pitcher(s) or reliever(s). Pitchers specialize these days.  Some are long relievers meaning they have the stamina and the “stuff” to pitch several innings.  Others pitch in short relief–maybe to face just one guy because they have a specialty pitch that just flummoxes some batters.  Then there are closers who usually come in only in save situations at what could/should be the last inning of the game–the closer’s team is in the lead but only by 3 or fewer runs which means that one hit or series of hits could theoretically lose the lead/the game and it’s a blown save (BS) for the relief pitcher/closer.  Relief pitchers can win the game without the five inning threshold (life is not always fair).

American major league baseball (MLB) is divided into two leagues and the leagues are further subdivided into divisions (West, Central, and East). The only real difference between the American League (AL) and the National League (NL) is that in the AL, the pitchers do not hit–there is a Designated Hitter (DH) whose only job is to hit.  To my way of thinking, that means there is less strategy in American League games (I’m a NL fan so I could possibly be biased 😉 ).  Pitchers usually do not hit well because they concentrate on their pitching and National League managers may, therefore have to make the decision to pull their pitcher for a pinch hitter.  Once you’re out of the game, you can’t go back in.  So do you burn one of your pitchers in hope of getting a hit? Or not?  Occasionally there is interleague play but the most important games are played within a team’s own division.

Whoever has the most number of wins in the division at the end of the regular season will go to the playoffs (plus a wild card team–the next “most winningest” team from all of the divisions in that league) for that league in postseason play (oh, by the way, we’re in the preseason now with Spring Training).  Once the “best” team from each league is finally determined after the “playoffs,” the World Series occurs.  The team who wins the most out of the seven possible games (i.e. wins four games) of the World Series is the “World Champion.”  You have to realize, though, that there is only one team that’s not from the U.S. in Major League Baseball (the Toronto Blue Jays of Canada) so using the word world is a decided stretch.

Why yes, I have been to Spring Training.

Baseball is a game of statistics (and abbreviations/acronyms).  Some of the important ones are:

Batting Average (AVG) which is the percentage of hits per at bats a hitter gets over the regular season.  A stellar AVG is .300 (say “three hundred”) or above.

Runs Batted In (RBI) is how many times a batter causes his team to score including himself.  A home run with men on would mean more than one RBI at a time.  You can get an RBI even if you walk if the bases are loaded and the man on third is, therefore, “forced in.”

Earned Run Average (ERA) applies to pitchers only and refers to the number of runs he gives up to opposing teams excluding those that scored who were originally walked or hit by a pitch.  The lower the pitcher’s ERA, the better.  You can compare pitchers by comparing their ERAs and their wins.

AB = at bats (number of time a batter has batted, basically)

SO or K = strikeout

I’ll stop here for now but there is so much more I could say.  I just like to watch baseball but am not an expert nor do I play one on TV.  Go find yourself a game to watch and GO GIANTS!  🙂