Tomorrow (Feb. 2) is Groundhog Day when either the groundhog will see his shadow and there will be six more weeks of winter or the groundhog won’t see his shadow and winter will be over soon (officially, though, on March 20: still six more weeks).  Any way you slice it, it’s still winter–only about half way through, actually–but the groundhog festivities really are interesting.  They’re likely based on old European traditions that Americans have twisted into an almost entirely new thing. 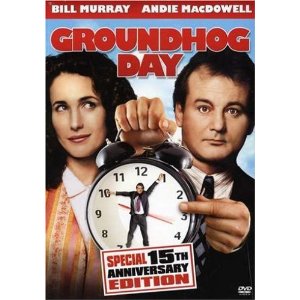 Here in California we’ve hardly had any storms this winter but it’s not the weather that’s dreary, it’s the lack of sunlight after one is released from the bonds of office life for the day.  Slowly the sun is returning (huzzah!) but, to celebrate GH day, I recommend an after-hours viewing of Groundhog Day, the silly Bill Murray movie.  The look is a little bit dated these days but that works out okay with the plot (days repeating over and over and over and over and…).

While You Were Sleeping

You'll Shoot Your Eye Out, Kid.

The Taste Tester likes It’s a Wonderful Life (I don’t so it’s not part of the five).

And these are TV programs, not movies, but A Charlie Brown Christmas and the 1966 animated How the Grinch Stole Christmas are perennial favorites. [The live action Grinch with Jim Carrey, however, is an abomination.]

What do you like to watch this time of year?