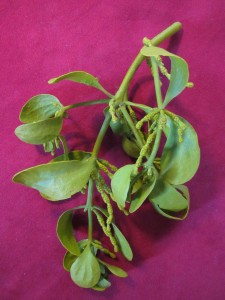 Followed yesterday’s suggestion and found some mistletoe on this morning’s walk. I broke this off a large bunch that had blown out of the trees during the nasty windstorms we’ve had lately. Mistletoe is a weird plant. It’s a semi-parasite, evergreen, and poisonous too. Birds eat the berries on the female plants thus spreading the seeds. The seeds are sticky which lets them adhere to branches, sprout, and then (more weirdness!) they grow root-like tendrils called “haustoria” that grow into the water-conducting tissue of the tree.  Plus it’s a kind of funky shade of green. And, yet, mistletoe has an ancient association with fertility, winter festivals, and, now, with Christmas.

The mistletoe pictured above is a California native species. The mistletoe first associated with Christmas was native to Europe but doesn’t look all that different. So, go ahead, stand under the mistletoe. Maybe you’ll get kissed! Of course, be choosy. And some legends say it’s the female plant (the one with the berries) that you need–some even going so far as to say that after each kiss a berry must be removed. No more berries, no more kisses. Have fun. 😉